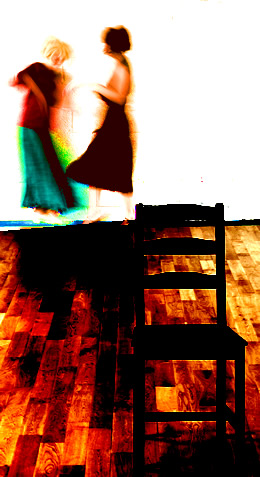 Susanna Hood
Artistic Director
Susanna Hood is a compelling and virtuosic performer in dance and music. She began her career as a member of the Toronto Dance Theatre from 1991 through 1995.

Independently, she has performed the works of various Toronto choreographers, created singing/dancing roles with Autumn Leaf Productions, acted on film for filmmaker Philip Barker, created music for the dance works of Louis Laberge Coté, Rebecca Todd and Eryn Dace Trudell, collaborated extensively with composers John Oswald and Nilan Perera, and performed widely as an improvisor both in dance and music. Her collaborative projects as well as her own choreography and music compositions have been presented throughout Toronto, nationally, and internationally on stage and in film since 1991. In the fall of 1998, she was one of two recipients of the K.M. Hunter Emerging Artists Awards in Dance.

Her first self-produced show, The Ides of May at Myth Production in May 1997, demonstrated a commitment to explore and present work that merged disciplines. Premiered in this show was her first substantial solo, Four ways of approaching a door
(“a kinetic, multi-layered, voice-driven solo” – NOW Magazine), which combined her talents as a choreographer, composer, and performer and marked the beginning of her development of a language of physical sound.

In 2000, Susanna founded hum to house her dance-based interdisciplinary vision of performance. Under the umbrella of hum, she produced her first full evening production, still, “a must see event – as precious, as rare, as that proverbial pot of gold” (Globe & Mail), which premiered at Artword Theatre in Toronto in November 2000 to outstanding critical acclaim.

Both in and out of association with the company, Susanna has been actively involved in collaborative interdisciplinary creation projects exploring the interaction of movement, sound and varying forms of interactive technology. Such collaborations have included feel HEaR SEEcret with performance artist Katherine Duncanson, musician/composer Nilan Perera, and electronics artist Jim Ruxton at Toronto’s Free Fall Festival 2002; Spinvoler with composer John Oswald at music festivals in Berlin, Brussels, Paris, and Albi 2002/03; and Liminal Projects with the team of musician/composer/visual artists Jackson 2bears and Tom Kuo, and visual artist Tanya Doody throughout Ontario and British Columbia 2001/02.

Nilan Perera
Music
In the past 20 years, guitarist and composer Nilan Perera has been active in some of the most forward-looking Canadian music ensembles including NOMA, Bill Grove’s Not King Fudge, Handslang and the Excalceolators.  He has also performed and recorded with John Butcher, Evan Parker, William Parker, Jandek, Mary Margaret O’Hara, Glen Hall, John Oswald, Sarah Peebles, Eddie Prévost and Michael Ondaatje.  He has a decade-long association with multidisciplinary artist Susanna Hood as well as many other independent dancer/choreographers and theatre companies. Currently Nilan leads holyblueghost, rEDwIREaRCHaNGEL, and performs as a soloist.

Scott Thomson
Administrator
As an administrator, Scott was a founding board member of the Association of Improvising Musicians Toronto, where he served from 2005-09. He also founded Somewhere There, a venue for informal music in Toronto’s Parkdale neighbourhood, which he ran from 2007 to 2010, during which the venue hosted more that eight-hundred concerts of creative music and related media. Apart from his work with hum, Scott continues to be the administrative director of the AIMToronto Orchestra, and sits on the Artistic Committee of Productions Supermusique in Montréal.

Katherine Duncanson
Outside Ear – She’s Gone Away & Still
Interdisciplinary artist Katherine Duncanson is involved in the creation and performance of dance, music and theatre with an ever expanding array of dance artists, theatre artists, performance artists, visual artists, writers, musicians and clowns, and has been a member of the interdisciplinary collective, Urge, since 1995. Currently creating a body of solo work that integrates text, extended voice, movement and song, Katherine also enjoys her work as a music educator, voice teacher, creative facilitator and yoga instructor.

Heather MacCrimmon
Costume Designer – She’s Gone Away, Waking en-dessous & Still
Heather MacCrimmon designs costumes for film, theatre and, primarily, contemporary dance. She is currently dividing her time between Toronto and Germany (where she works with Fabrik Potsdam). Among the many choreographers she has worked with, she frequently collaborates with Susanna Hood, Serge Bennathan (Dancemakers), Marie-Joseé Chartier, Heidi Strauss, Yvonne Ng and Claudia Moore.

He has contributed to five seasons at the Stratford Festival, where he designed sets for Timon of Athens, Agamemnon, Electra, and set and costumes for The Flies. He also designed the sets for the six one-act plays in the Stratford Festivals inaugural season of the Studio Theatre. Other notable past credits include set and costumes for Three in the Back, Two in the head, and The Goat (Neptune Theatre), Unity 1918 (Theatre Aquarius), set and lighting for Underpants, Swimming in the Shallows and Mojo (Theatrefront), Road (George Brown College), and Soulpepper’s inaugural Academy and set designing The Caretaker (Soulpepper).

Jennifer Tarver
Director – She’s Gone Away
Winner of the 2002 John Hirsch Directors Award, Jennifer is an acclaimed Canadian director knownc for pushing the theatrical envelope. She has a passion for international scripts and has been directing, adapting, devising and independently producing new work in Toronto for the last six years. Jennifer is the founder and artistic director of Theatre Extasis: a physically based company focused on devised works and new adaptations of existing texts including the Dora nominated History Play and Not Faust. Her company’s most recent work, That Time – a series of short plays by Samuel Beckett, was nominated for eight Dora Awards winning four of them including best director and best production. Jennifer is currently developing Dream Life a new work based on Calderon’s Life is a Dream. She holds a bachelor degree in performance from the Manhattan School of Music and an MFA degree in directing from the University of Alberta. She is currently the Associate Director at the Theatre Centre, leading their new work development program. She loves music and has directed unique interpretations of classical and modern opera.
Recently, she has directed Thom Pain at the Tarragon Theatre, Benjamin Brittan’s A Midsummer Night’s Dream for the Royal Conservatory of Music and Susanna Hood’s She’s Gone Away at The Theatre Centre. Other directing credits include Love’s Labour’s Lost (York University) L’Enfant et les Sortileges by Ravel, The Turn of the Screw by Benjamin Brittan and Mozart’s The Magic Flute (Royal Conservatory of Music), Angels in America (George Brown Theatre School), The Zoo Story (Summerworks 2003), Martian Summer (Theatre Direct), Echoes (Queen of Puddings Music Theatre). 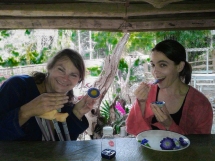 Catherine Thompson
an stiúideo fiáin
hum Web & Print Design
Catherine is currently living in the north of Thailand on a mountain, in a forest. Catherine is a long rider, composer, vocalist, musician, instrument maker, visual & material artist among other things. musicforestinstruments.wordpress.com